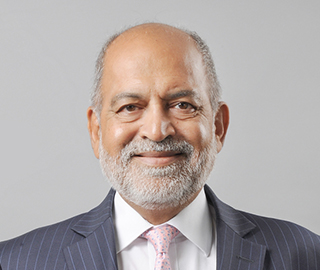 Mr. Adil Zainulbhai is the Chairman of the Quality Council of India. He is also the Chairman of Network 18 and TV18 and is currently on the Boards of Reliance Industries Ltd., Cipla Limited, Reliance Retail Ventures Limited and Reliance Jio Infocomm Limited.

Mr. Zainulbhai retired as Chairman of McKinsey, India, after 34 years at McKinsey, and the last 10 years in India. Prior to returning to India, he led the Washington office of McKinsey and founded the Minneapolis office.

Recently, Mr. Zainulbhai co-edited the book, ‘Reimagining India’ which featured 60 authors including prominent businessmen, academics, economists, authors, and journalists. The book has been No. 1 in non-fiction in India on its release and No. 2 on Amazon’s International Business List in the US.

Mr. Zainulbhai grew up in Bombay and graduated in Mechanical Engineering from the Indian Institute of Technology. He also has an M.B.A. from Harvard Business School.

Mr. Zainulbhai is very active in the community and social causes. He is a Board member on the Board of Piramal Swasthya and Piramal Foundation.